The Song of All book

The Song of All book

The Song of All. Tina LeCount Myers 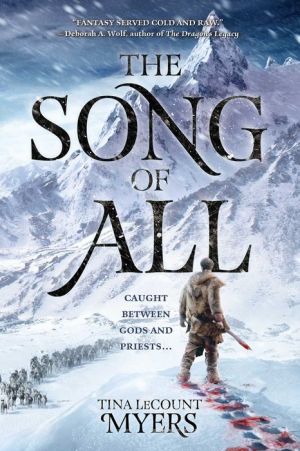 The Song of All Tina LeCount Myers
Publisher: Skyhorse Publishing

The song was released as the album's lead single on 19 August 2002. "All of Me" is a popular song and jazz standard written by Gerald Marks and Seymour Simons in 1931. "All I Really Want to Do" was first released on Dylan's 1964 album Another Side of Bob Dylan. Our best road trip songs list is your essential guide to beating boredom and keeping the party going on your next vacation. From their first English studio album 200 km/h in the Wrong Lane (2002). "All You Need Is Love" is a song by the English rock band the Beatles that was released as a non-album single in July 1967. Let It Snow!," "Winter Wonderland," "Sleigh Ride" and "Have Yourself a Merry Little Christmas"  new songs to enter the top tier of the season's canon include " Wonderful Christmastime" by Paul McCartney, "All I Want for Christmas Is You" by Walter Afanasieff and Mariah Carey, and "Last Christmas" by George Michael. The song was also included on the Dylan compilations Bob Dylan's Greatest Hits Vol. It was written by John Lennon and credited to LennonMcCartney. It was released on May 4, 1999, as the second single from their album Astro Lounge and it is one of the group's most successful songs, peaking at No. One of the best moments on American Idol in 2014 was this glorious moment between judges Nicki Minaj and Mariah Carey, who famously did not get on during the series. According to the 1998 Guinness World Records, it is the most recognized song in the English language, followed by "For He's a Jolly Good Fellow". II in 1971 and the 3-disc edition of Dylan in 2007. "Happy Birthday to You", also known as "Happy Birthday", is a song traditionally sung to celebrate the anniversary of a person's birth. "All of the Lights" is a song by American rapper Kanye West, as the fourth single from his fifth studio album, My Beautiful Dark Twisted Fantasy (2010). "All Star" is a song by American rock band Smash Mouth. "All the Things She Said" is a song by Russian duo t.A.T.u.